I’ve been watching local bands in Cleveland play and grow for several years now. Only a few times have I been so thrilled that I asked to join the band. Only once has my request been accepted, and so here I am as the bassist for Cellophane Jane.

But I’m going to talk about me as little as possible. In fact, I am confidently the weakest link in this band, and I want to talk about those other guys instead.

The mastermind behind Cellophane Jane is Alex Moda. At age 26, hailing from Parma and living in Lakewood, he is young, local, talented, hard-working, and intelligent. He started Cellophane Jane as a solo project when his previous group, The Pistolettes, split up. He wasted no time, dropping the first CJ ‘mini-album’ the day the old band announced their breakup. After that, he proceeded to produce and produce and produce and- lo and behold, he ended up releasing FIVE short records, each at least 5 songs, in the course of his first year. In the battle of quantity versus quality, I will take the latter every time, except in a case like this; Moda delivers both. Every single one of these records has something unique to offer.

When Cellophane Jane started, it was purely a studio project. Eventually, Moda decided he wanted to take the show on the road. Unable to do that alone, he built a band by picking guys from his favorite local bands, previous groups he played in, and interesting characters he met along the way.

The first member he recruited was drummer Nathan Taylor. Nate and Alex go way back, having played together before as The Marauders, when they were teenagers. Taylor is an interesting drummer, not quite like any I’ve worked with before. He has a vast array of influences, and between songs at practice, he is always practicing rudiments he has learned in his classical training. He is loose and follows the energy of a moment, while also being level-headed and focused on keeping the beat.

The next guy Moda tagged for Cellophane Jane was Randall Hoyle. Moda met Hoyle at a Pistolettes gig, then connected him with the folks he would come to play with in his other band, Samfox. At their shows, Randall switches between his guitar and trumpet. He’s even preparing to be the new keyboard player for another local act, furthering his multi-instrumentalist reputation. As Cellophane Jane’s guitarist, Hoyle adds his own flavor to Moda’s original songs. The things he’s capable of doing on the fly are very impressive, and then the harmonized solos the guitar duo prepares are an even greater treat.

I joined this trio when I signed on to play the bass, and we played a handful of shows as a 4-piece, including our 5-CD release party last July.

Right around that time, something awesome happened. Nate, our drummer, told us about a show he was playing in. It was a production of Green Day’s American Idiot musical at the Brecksville Theatre. The show’s music was directed by Mike Abbadini, a guy I’ve known as a friend-of-a-friend since I was just a preschooler, and as a great keyboard player since he appeared onstage with Essential Groove a few years ago. After they broke up, Abbadini used the musical to keep busy. After the musical ended, Abbadini decided to join Cellophane Jane to keep him busy. Moda used layers of keyboards all over the five records, and finally, for the first time, he found a versatile and capable player in Abbadini to fill that gap in the live setting. 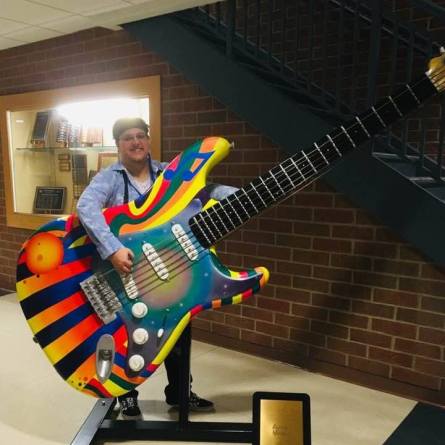 Now playing as a 5-piece, Cellophane Jane is working on new material for a full-length, full-band debut. In the meantime, we are playing some local shows, and plotting to tour around the Great Lakes arena.

5/18 at 5 O’Clock Lounge w/ RADATTACK
6/27 at WRUW 91.1 Live From Cleveland (tune in on the radio)
6/29 at Love Fest on Chardon Square(also featuring The Lab Techs, and Alex’s other group, The Tom Katlees, plus a score of others)